A Sister from Another Mister

Bien Venidos!  My name is Annie, and I have been asked to contribute to my cousin Angela’s blog.  For my first post, I decided to introduce myself by explaining in detail my relationship with my cousin, and provide some insight on the most embarrassing secrets that she probably doesn’t even remember and would not appreciate me telling.


Growing up, I used to annoy Angela by calling her my second cousin – her mom and my dad are cousins, and therefore we are technically second cousins.  (I guarantee she is rolling her eyes as she is reading this right now.) **[I am SOO rolling my eyes >> ]  We are the same age – Angela is five months older than me, but I have (and never will) call her “unni.”  Eww.  While growing up, our family treated us like twin sisters.  Anytime one of us got a gift from a relative, the other one got the same gift.  We even had matching swimsuits when we were toddlers.  The swimsuits were made of this nylon material in a florescent pink color with sequins.  Did I mention we grew up in the late 80s?  For those of you who didn’t grow up in the 80s, everyone (adults to toddlers) wore outfits that looked similar to costumes that ice-skaters wear when they compete. 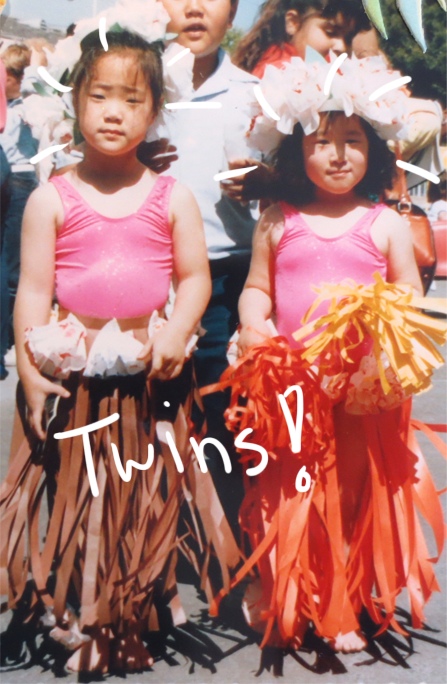 From elementary to high school, we went to the same schools and knew the same group of people.  We had the same extracurricular activities such as Korean school, church youth groups, piano lessons, swim lessons, and SAT prep classes.  We have been in each others’ lives since the beginning of our existences, and have seen each other grow up from innocent youths to awkward teens to now aging young adults.  Our families always compared us and took tallies on who did better in what, and I am sure there were times where we secretly wanted to give each other diarrhea out of spite and hatred.

Like many sisters, we have good days and bad days.  But no matter how bad those days may be, we always made up and forgot what we were fighting about.  And like sisters, I know how to make her annoyed and pissed off.  There was a period of time where she had to chauffeur my grandma and parents around town; as a result, I created the nickname “Kim Ghi-Sa” (Driver Kim) based on all of the Korean dramas, and it caught on like wildfire where everyone in my family started calling her that.  One time, my grandma even called her on the phone and said, “Kim ghi-sa, come over and take me to the doctor’s office.”  Wow, Angela used to give me the dirtiest looks when I busted up laughing.

Another thing that annoys her is when I get her addicted to snacks. It does not help that we encourage each others’ fat girl habits.  With Angela, she has no control over her cravings.  If she does not satisfy them within the hour, she will go crazy.  I mean, CRAZY!  Like, psychotic.  Anytime I buy something new, I slyly give some to her..because I am such a considerate and loving cousin, of course.  Okay, I will admit it – I do it on purpose and I think it is hilarious when she goes to the grocery market in the middle of night and stocks up on like five bags of Trader Joe chocolate-covered pretzel bites with peanut butter fillings.  Did you see her May Favorites Youtube video?  Mwahaha! * cue sinister music * (I know there is a place is hell for me for doing that.)  Right now, I got her addicted to the Jalapeno-flavored Kettle chips.  She has been looking everywhere for them.  MWAHAHA!  Before you judge me, I will like to put on record that I am NOT the bad guy.  I know she does it, too.  She brings over a brand new bag of birthday cake flavored oreos for me to “try.”  What a bitch.  Hey, that is the kind of love-hate relationship we have going on.  #SisterlyAffection #YesIUsedAHashtagInABlog #Hashtag 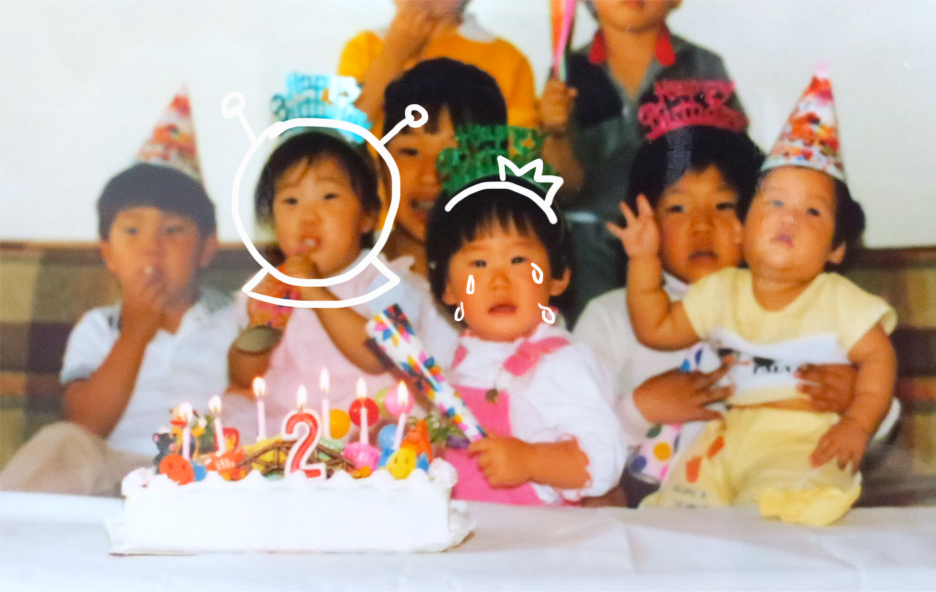 On a brighter note, I think the most positive thing about our relationship is the fact that we are the complete opposite of each other in terms of personality.  Angela has always been the adventurous and outgoing one – she likes to try new things, and face new experiences.  I, on the other hand, am a bit more conservative and usually very timid about trying things out for the first time.  I need to build up my confidence before taking a big leap of faith, while Angela just goes headfirst without second-guessing herself.

Speaking of going headfirst, Angela is clumsy.  She is so clumsy that sometimes I think she has the motor skills of a toddler.  When we were in Seattle, she sprained her ankle on the second day.  Granted, mistakes happen.  But, how do you sprain your ankle while tripping over a crack in the cement?  I have sprained my ankle because of raised uneven pavement, but this was a CRACK.  Although I was concerned, there was a split moment where I busted up laughing because I could not believe it.  (Yes, I am going to hell for that one, too.) **[I'd like to clear up that it was indeed uneven payment and NOT a crack! Pshh]

Angela has been my constant during all of my life experiences.  In the last few years, she has always been there for me during difficult times.  She was by my side during late nights and long days at the hospital when my grandma fell ill.  She was even at my side when my grandma passed away and I had to give my tear-filled goodbyes.  During that difficult time, she was there to get me through it and even physically helped out.  And for that, I am always grateful and very blessed to call her my “sister.” 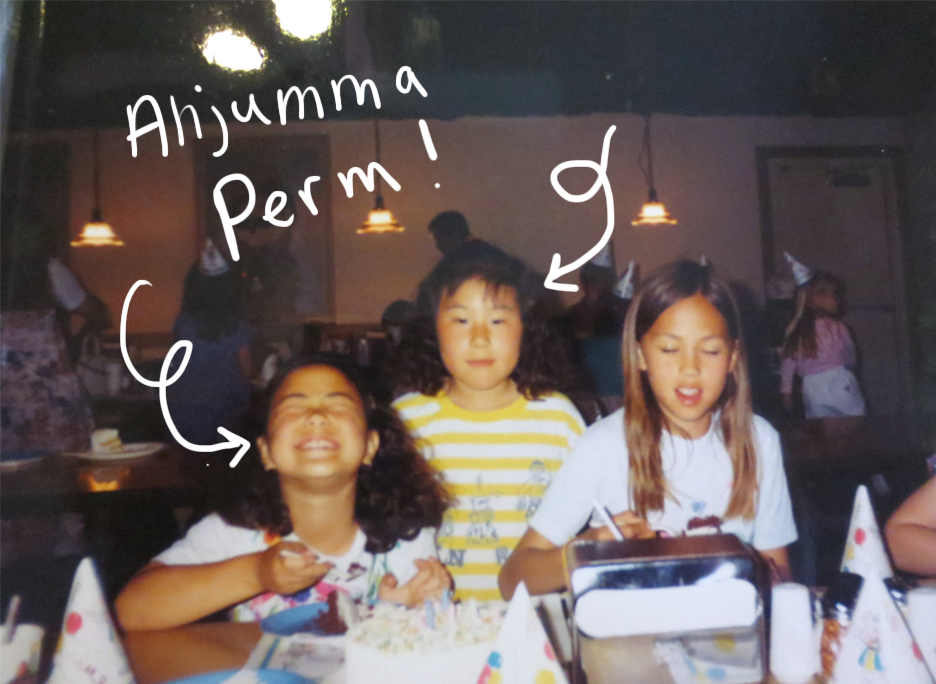 In addition to the reasons mentioned above, Angela gives me the best advice on how to poop properly and indiscreetly in public restrooms.  Me and my bowel movement thank her immensely. 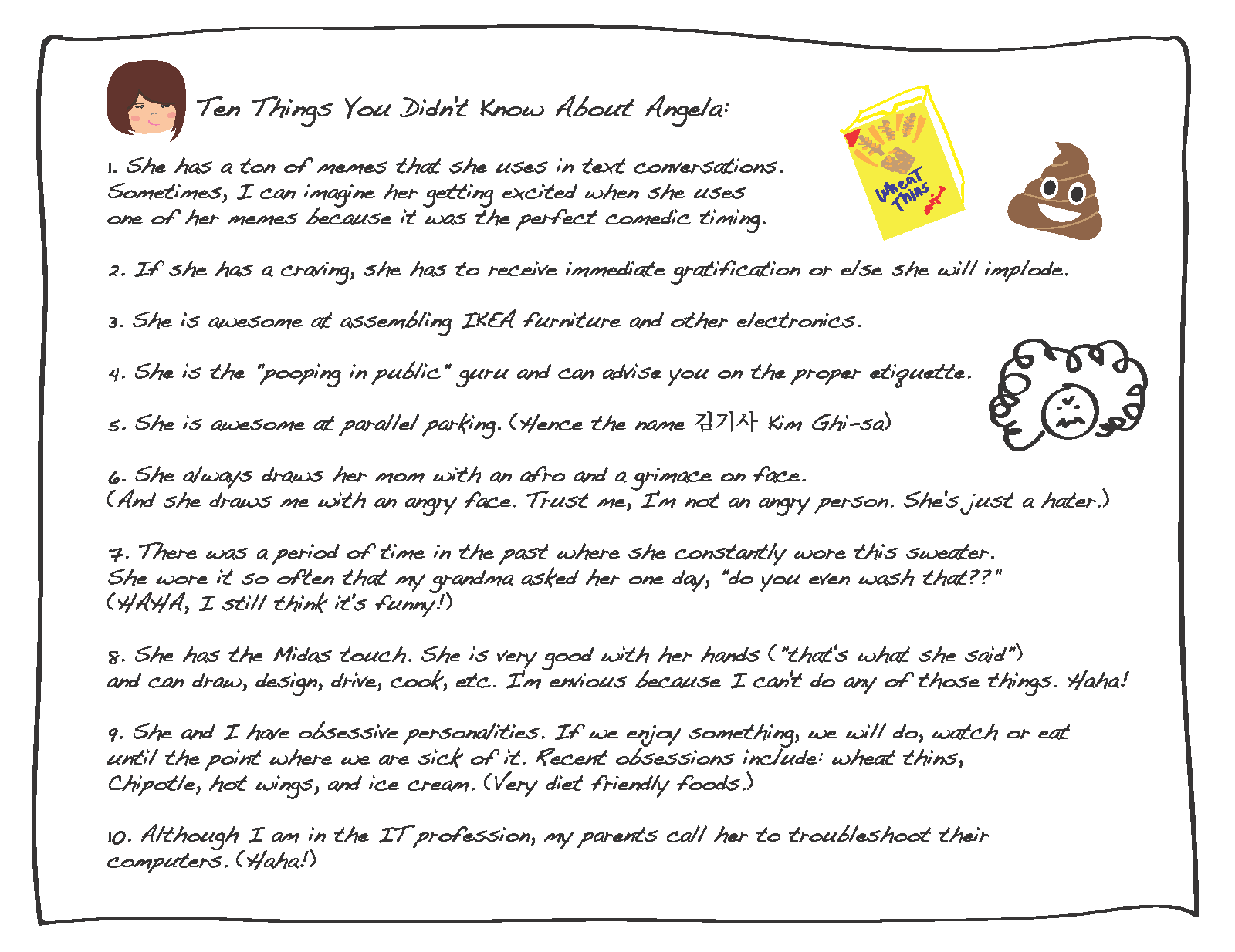 **I hope you enjoyed getting to know a little bit more about me and my cousin. Let me just say that I DID NOT tell her to write about me for her first post. This was all her idea! Really! (Btw cuz, I put a $20 in your purse) ;)
Posted by Angela Minji Kim at 3:23 PM