If you grew up in an Asian family, I’m sure you might have had your share of hair perms aka The Ahjumma Hair / Ahjumma Perm or know someone who has. Ahjumma means “older lady” in Korean. Lots of older ladies and grandmothers like to sport this poofy, curly hair. It’s not only stylish to them, but it’s also a form of convenience as it’s a very low maintenance hairstyle. I swear, from the moment I was born, it seemed as though my mother has had my hair permed. Looking back at childhood pics, I have always don the ahjumma hair. I would admit in some pics I looked kind of cute, but for the most part I looked like a 50 year old lady stuck in the body of a 5 year old. 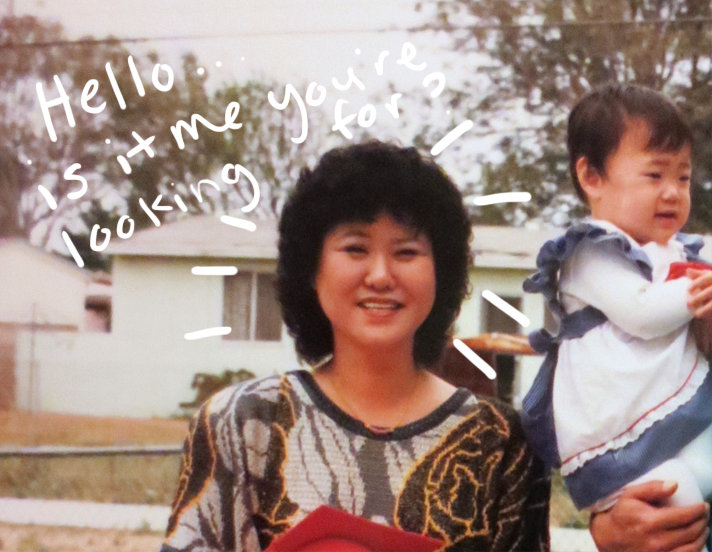 The process of having an ahjumma perm takes a lot of patience. I remember having to sit at the salon for HOURS to get my hair done. It also took extra long because my mother was getting a perm as well. If my grandmother was with us, think of your day as long gone! The ahjumma who always did my hair had quite the poofy mane herself, so you know she knew what she was doing.

She would wheel her small cart out which contained drawers with an abundance of small colorful hair curlers. Starting out by sectioning my hair, she would take some sort of small wax paper and put it under a small section of my hair. Then in a squeeze bottle was the most horrible part of the perm: the perm chemical. This smelled AWFUL. It smelled like vinegar mixed with Clorox bleach.  It also made sitting in the chair far worse because the smell would get to you.  She would then squeeze the clear chemical on your hair, get one of the colorful hair curlers, and then tightly wrap your hair around it. I would flinch at times because the ahjumma would pull my hair to get the hair curlers in. It would hurt! After 40+ curlers in your hair, she would put a hair cap around your head and off you go to sit again in a chair that blew hot air to your hair.

This was the second worse part of the whole thing because you had to sit there for a long period of time and your head would be SUPER ITCHY from the chemicals. Every time I would try to scratch it, my mother would yell at me to stop. I would whine about it all the time and then she would give me the death stare and I would immediately shut up. It always seemed like sitting under the hot air took forever. I don’t remember but it could have been 30 mins to an hour. I forget. I would grab some Korean magazines on the table to look at, but I couldn’t really read anything. I would just look at the pics in the magazines and be done with the whole thing in a minute. You knew you were saved from the horrors of the chair when you heard the *ding from her timer. Then the ahjumma would take me to the back to take out the curlers and rinse my hair. She would then bring me back to the style chair and blow dry my hair with a round comb and fluff the life out of it. After hours of being at the salon, the end resulted in all of us looking like triplets. 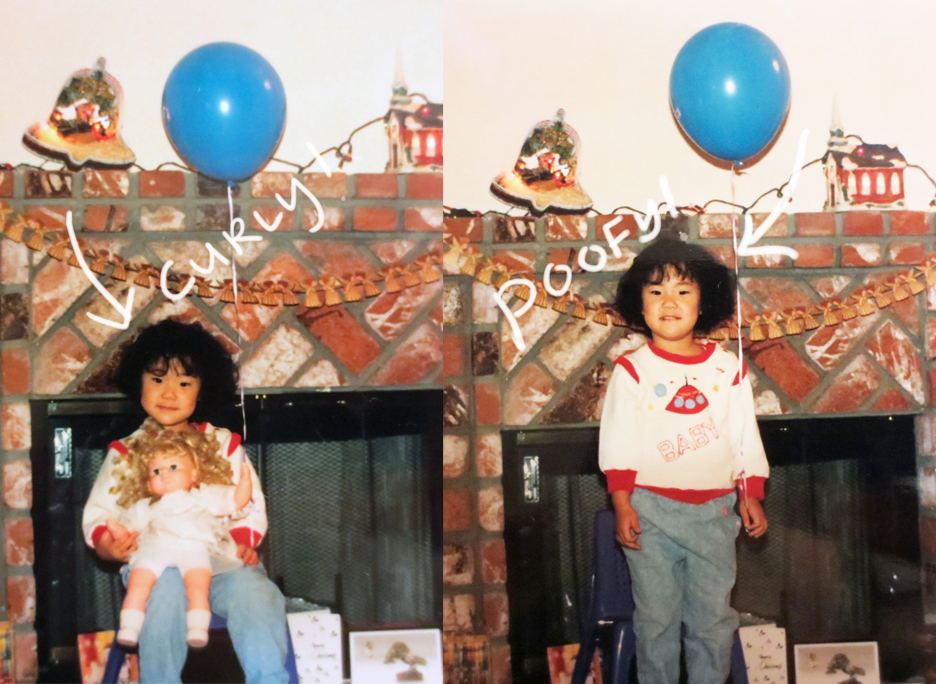 It wasn’t until I was around 9 years old when my mother told me it was time to get my hair done, and I protested for the refusal of the ahjumma perm. I told her I was grown up enough to make my own hair choices, and the first agenda on my list was NO MORE AHJUMMA PERMS! She actually took this quite well and took me to Supercuts. Btw, NEVER EVER EVER EVER EVER go to Supercuts. NEVER. That might be another story, but I’m sure I don’t need to answer why.

By this time, the salon that we use to go to had closed and there was a Supercuts across the street from there. Since I had told my mother I was a “grown up” she parked her car in the lot, gave me some money, and told me to go get my haircut myself. When she told me that, I basically shitted in my pants right there. I would always get nervous when I had to talk to strangers, how the hell was I suppose to tell the lady how to cut my hair? I cried and told my mother how I didn’t need a haircut and horns started to come out of her head so then I ran out of the car.

I remember walking into Supercuts and it was pretty empty. The lady who worked there asked me what I needed, and I just told her that I needed a haircut. She sat me in her chair and asked me again what style I wanted. All I remember was that I loved Jennifer Aniston’s hairstyle from Friends. I didn’t know then, but that was a very popular hairstyle in the 90s. Now, for a 9 year old to tell the hair stylist that she wanted an Aniston style didn’t go quite the same. I didn’t even know how to describe it, so I just mumbled and gestured that I wanted it a little longer than shoulder length. Obviously, my hair ended up fabulous. Jennifer Aniston and I basically looked like twins. NOT. The lady ended up cutting my hair way shorter than what I had wanted and didn’t even blow-dry my hair. I didn’t know that you had to pay extra for that. I walked back to my mother’s car with the change from the haircut and with sad, wet hair.

I remember my mother looking at me and asking me if that’s what I wanted. My pride wouldn’t let me say no and instead I told her yes. She just laughed and took me home. That was the start of many horrible haircuts to come. Maybe I should have just listened to my mother. Mother’s know best? CURSES!!

I asked my mother recently why, why did she put me with ahjumma perms all those years? Her answer took me by surprise. She told me that I actually begged her to get those perms! SAY WHAT?!? I do not recall any of this and she has no proof!! No proof I tell you!! Since then I’ve thought about this, and the only logical reason I could think of was that I’ve seen my grandmother, mother, and all the other women in my family get perms. Curiosity probably got the best of me.  I always assumed it was because my mother didn’t want to do my hair and it was easier for her. After all these years, I’m still going to stick to that story. Just don’t tell anyone. 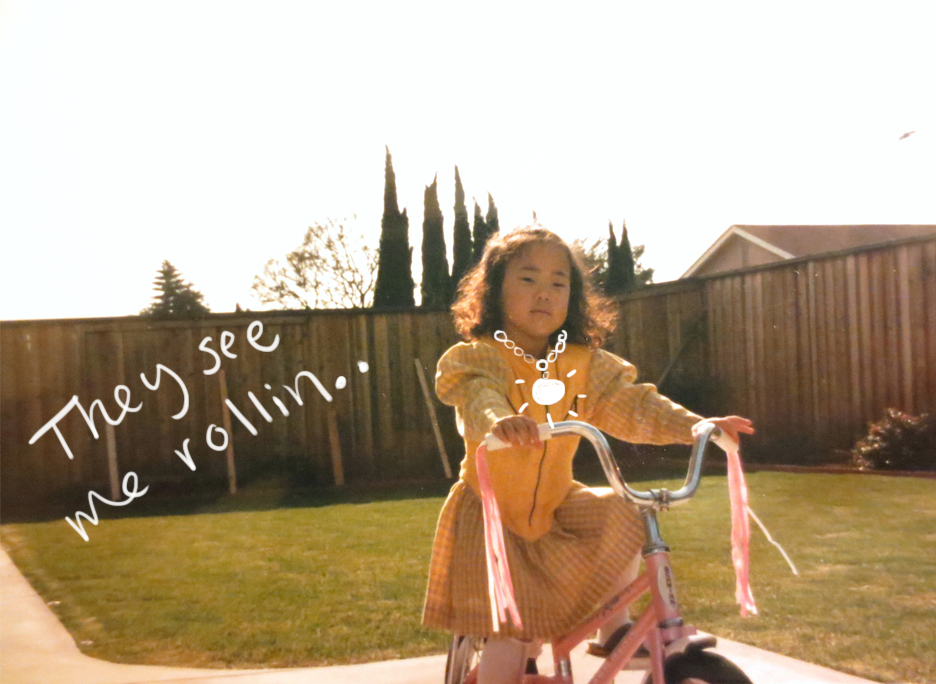 *I decided to start blogging on here again along with my cousin! She will be making appearances here and there. We have lots of stories to tell and would also like to know what you would be interested to hear about! :)